Update on the trestle

Most of the scenery is complete around the trestle. 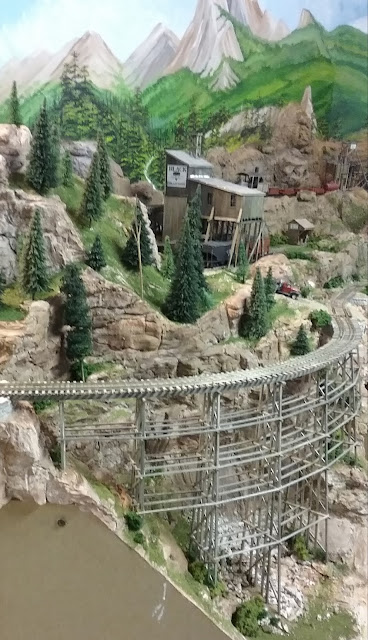 Cave junction was depicted as an old western town, as seen on the title page. The sawmill, blacksmith building, the saloon, the and bank were all removed. New town buildings and 2 new factories were added to the modernized town.

Made a rough cardboard mountain shape. 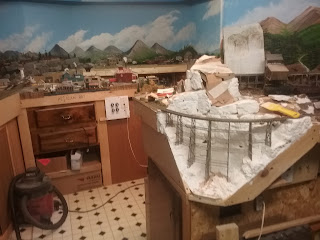 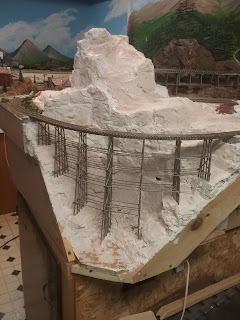 Here are the results. Note the talus at the bottom of the cliff. After the trestle is permanently installed, more bits of rocks will be added. 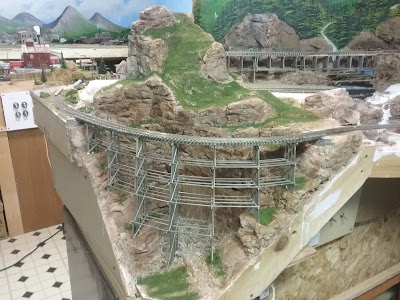 Carving or scratching in strata lines help make the various cast rocks, blend together. In the picture below strata lines were even carved around a corner. 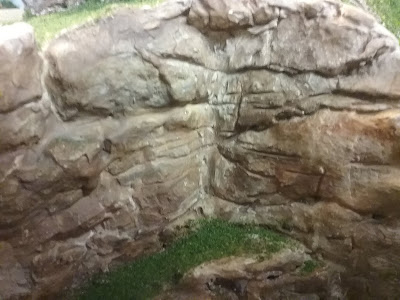 In some areas, faint line were enhanced a little, in other places the faint strata lines were over emphasized. The promitory below is an example of this
technique. 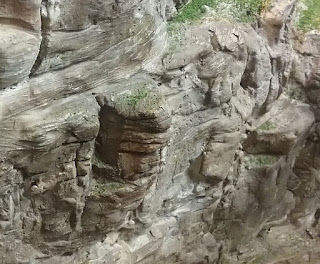 None of these cracks and fissure were in the casting.
Posted by Larry at 4:34 PM 2 comments:

The Cliff behind the trestle.

Put in a support system, hung under the existing table top. It was made up of scrap wood and spaced the height of my rock castings. It also was made to have crooks and crannies along the cliff face. 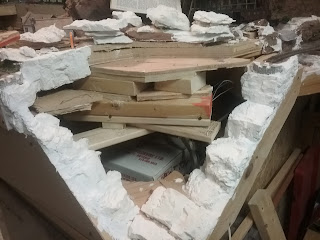 Rock castings were added to all the stepped out levels and most of the gaps were filled in. Any remaining ones will get filled in after the plaster dies. 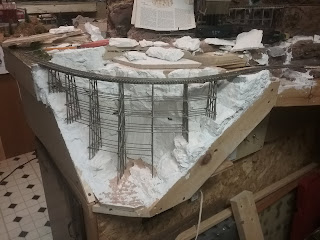 Hard to see with the castings being all white but there is 4 stepped up levels. I may have to do some rework to make the bent steps not look so contrived. On wards and upwards, to the mountain tops.
Posted by Larry at 8:12 AM No comments:

Rock work under the bents

The new trestle area was prepared for the supporting terrain under the bents. 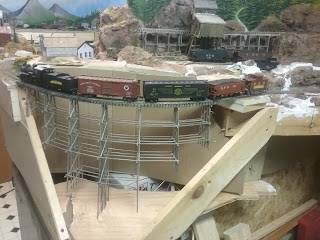 Then rock molds were added under the bents. 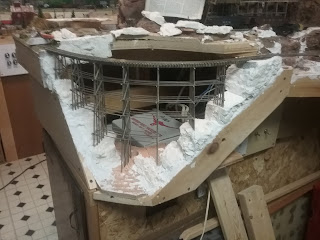 About 25 molded rocks later. Next to cast more rocks to fill in the cliff area.
Posted by Larry at 1:57 PM No comments:

Oh what should I do during the "Isolation"? A January 1986 issue of Model Railroader somehow keeps landing in my hands, by the way it cost $2.75. Floor to ceiling scenery and the spindly trestle, draws me  over and over to the Snake Head Trestle area on Mike Simon's Silverton & Telluride Ry. Co. layout which was designed by Malcolm Furlow, So I decided to bite the bullet and build my version of it. 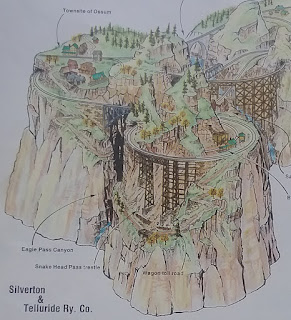 Now who wouldn't want this as part of your layout? To set the record straight, I'm not building the scenery from the ceiling to the floor, my trestle is only 11 inches high, not 18 inches high, I left out the short truss bridge and I doubt my scenery will rival theirs.
Below is a picture of the area where the trestle will be installed with a cardboard template of the shape of the trestle. You will also note the scenery has not been removed yet. Yes I'm building the trestle first! 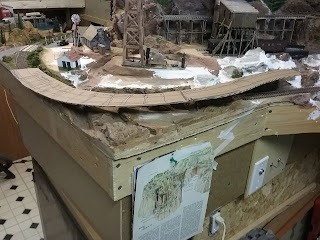 Using this template the stringers were glued and bent between rows of finishing nails. After drying for a day, ties were added between the nails. Once they dried the nails were pulled and ties were added to these areas.
The next step was to use an old code 83 flex track I had on hand. After removing most of the ties, only leaving 1 tie every 2 inches or so, it was taped down to conform to the radius of the trestle deck and the ties left on the track were adjusted in between the deck ties.

Even though the flex track ties keep the rails in gauge, track spiking gauges were also used. Below is a close up to show the gauge and remaining ties.

As can be seen the tracks were spiked down every 2 or 3 ties. The code 70 guard rails were added next. Once everything was checked the flex track ties were removed. As a note the flex track ties are half as thick as the trestle ties, allowing them to be pushed down and slid out from under the rails.
Trestle bents and bracing were built and added to the deck. 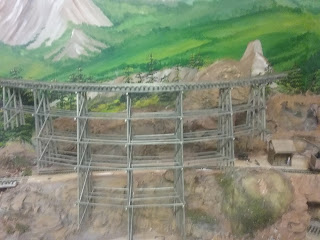 Completed trestle sitting on another part of my layout. Stay tuned for the rest of the story.
Posted by Larry at 10:42 AM No comments:

When Dave brought in a lighthouse for the club, I knew I needed 1 for my layout. However I just got the cupola, railing and base and light.